Raising funds and creating a lasting legacy for children and young adults with disabilities and life limiting illness in Suffolk. Supported by John and Imogen Sheeran for GeeWizz and Zest charities.

Includes priceless Ed Sheeran items such as the handwritten lyrics to Perfect, a signed poster and ticket to his very first gig, a collection of Ed’s childhood lego bricks and a You Need Me EP 2009, handmade by Ed 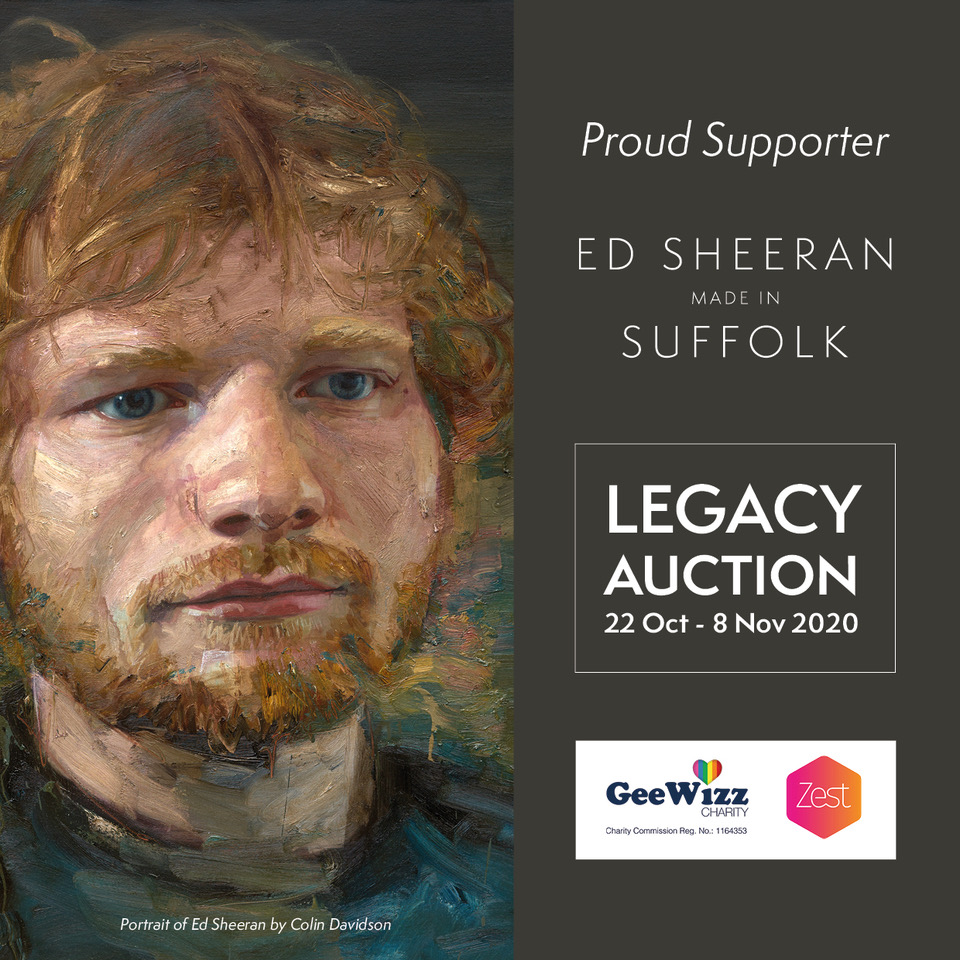 Suffolk charity GeeWizz today announces the worlds of music, film, sport, hospitality, and art have joined forces to raise funds and create a lasting legacy for children and young adults with disabilities and life limiting illness in Suffolk. Ed Sheeran: Made in Suffolk Legacy Auction is hosted by online auction site thesaleroom.com, in partnership with auction house Lacy Scott & Knight, and is open to online bidders from today, 22 October until 8 November 2020. For more information please visit: www.edsheeranmadeinsuffolklegacyauction.com.

John and Imogen Sheeran, Ed’s parents, wanted to create a lasting legacy from the Ed Sheeran: Made in Suffolk exhibition, currently open at Christchurch Mansion, Ipswich, to support children and young adults across the county. Having met Gina Long, founder of the children’s charity GeeWizz, the idea of a Legacy Auction was created and, over the last year and throughout COVID-19 lockdown, Gina has worked closely with them to turn it into reality beyond all their expectations.

The auction will leave a lasting legacy for children and young people across the East of England. Proceeds raised from the Auction, under GeeWizz’s auspices, will support the redevelopment of a playground at Thomas Wolsey Ormiston Academy in Ipswich, for children with special educational needs and disabilities. Zest, part of St Elizabeth Hospice, will also benefit. Funds raised will help to enable teenagers and young adults with progressive and life limiting illnesses, to live their lives to the full, supported by specialist nurses and an outreach programme.

Several items have been donated by Ed and his family: they include possibly the most romantic gift ever Ed’s handwritten lyrics to the global hit Perfect; a signed ticket and handbill from his first ever gig at the Royal British Legion in Framlingham (entry £3!); Ed’s homemade CD of the You Need Me EP 2009 and a collection of his childhood Lego® bricks.

Music fans can also look forward to bidding on signed Pink Floyd memorabilia from Nick Mason, guitars from John Mayer, Snow Patrol and Steve Harley, a Rolling Stones gold disc and very rare Beggers Banquet photographic print both donated by Bill Wyman, Anne-Marie’s handwritten, illustrated lyricis to 2002, Brian McFadden’s last award with Westlife, and tickets with meet & greets for Keane and Duran Duran concerts. Brian Eno has donated a one-off signed photographic print, captured at Benacre Beach in Suffolk, whilst out walking during lockdown. There is also the opportunity to bid on VIP tickets to the BRIT Awards 2021 and the 2022 GRAMMYs, including the prestigious After Show Parties alongside unique access all areas experiences at festivals including Latitude and Sundown, an ultimate music experience at Defected Croatia and 2 FKP Scorpio Golden Tickets for 10 shows in UK and another 2 Golden Tickets for 10 shows in Germany during 2021-22.

Damien Hirst has donated a stunning limited-edition signed print from his Kaleidoscope series. Original artworks include a large portrait drawing of Ed Sheeran by Colin Davidson: one of the artist’s original drawings relating to a series of portraits that are the centrepiece of the Ed Sheeran: Made in Suffolkexhibition. Brilliant artworks have been donated by contemporary artists, including photographers Mark Surridge and Ralph Larmann whose print is uniquely signed by Sir Elton John and Ed Sheeran. The auction features works by many Suffolk-based artists, including Jelly Green and sculptors Laurence Edwards and Roger Hardy. From the world of literature, there will be signed books from Anthony Horowitz and David Walliams.

From the world of film, there is the chance to bid for a very rare Lord of The Rings wall plaque signed and donated by Peter Jackson, along with a deluxe edition of The Hobbit and a poster signed by the main members of the cast including Elijah Wood, Cate Blanchett and Orlando Bloom. Also featured is a film cell from Love Actually donated and signed by Richard Curtis and Emma Freud, along with a framed, annotated page from the original script (containing one of the most famous scenes in the movie between Keira Knightley and Andrew Lincoln).

For sports enthusiasts, there are signed personal items from David Beckham, Usain Bolt, Ben Stokes and Shane Warne, including his iconic floppy white hat and a once in a lifetime opportunity for an hour in the nets at Lord’s. Further items have been given by the England 2020 Rugby Squad and Dame Jessica Ennis Hill who has contributed a signed Team GB Rio 2016 Olympics running vest. Champion jockey Frankie Dettori has donated the riding boots worn to historic victory in King George VI Stakes 2020. Also on offer is VIP Hospitality at a wide variety of sporting events including a Manchester United home match, England International Rugby match, Newmarket and Ascot Races, The Royal Windsor Horse Show and behind the scenes with Classic Team Lotus; plus exclusive use of Portman Road Stadium for two teams to play with Ipwich Town Football Club Legends with Terry Butcher and George Burley as team managers.

The auction will also feature the chance to bid on hospitality experiences donated by award winning chefs, including dinner at home with José Pizarro, a gastronomic host of fine dining establishments across East Anglia, and a family day including lunch and personal tour of his Suffolk farm with Jimmy Doherty.

“The incredible generosity of Ed, the Sheeran family, our sponsors and auction lot donors around the world is truly overwhelming; especially during these challenging times,” said Gina Long MBE, founder of children’s charity GeeWizz and organiser of the Legacy Auction.

“We are so pleased that the auction will create important, lasting legacies.” Ed’s father, John Sheeran said. “Proceeds will help to improve the quality of care and wellbeing for children and young adults across the county of Suffolk and beyond. Imogen and I send our thanks to everyone who has organised, supported and donated to the auction. We cannot think of a better legacy for the exhibition to leave.”